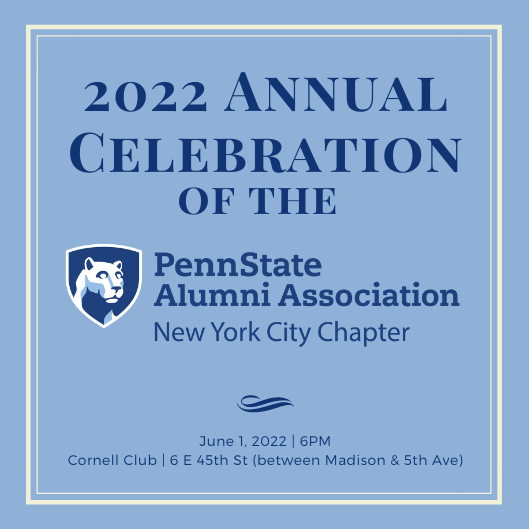 All local Penn Staters (and friends of the University) are invited to join us on Wednesday, June 1, 2022 at 6pm at the Cornell Club - Manhattan for an evening of networking and merriment at the Penn State NYC Annual Celebration / Networking Event. Admission to the event includes food and drink. The NYC Chapter Board of Directors is thrilled to announce Mike Karns as our guest speaker this year! Mike is the Founder & CEO of Marathon Digital and fellow Penn State alumn.

This event is an annual opportunity for local Penn Staters to celebrate the great year we have had as a Chapter and learn about our plans and goals for the upcoming year. We'll be raffling a number of great prizes and having a silent auction to benefit the Chapter's Scholarship Fund including a Sean Clifford signed jersey! The results of the 2022-23 Executive Board election will be announced.

For the first time in our Chapter's history, we are proud to also stream our in person Annual Meeting via Zoom if you want to join from the comfort of your own home.
We will be joined by additional special guests, who will be announced soon!

We hope you’ll join us for this very special evening and share in the festivities.

Mike Karns is a Tony Award-winning theatre producer and entrepreneur. Mike is the Founder and 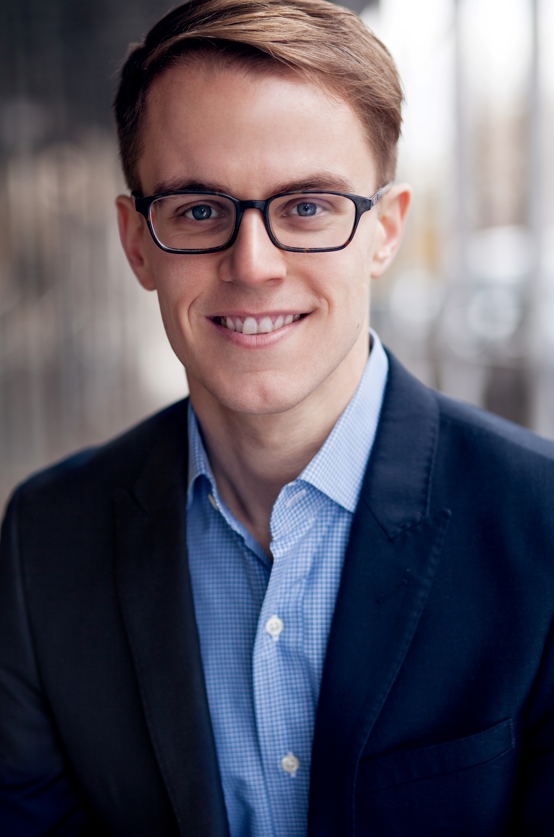 During his early years, he played a key role in the meteoric resurgence of George Takei, who today is frequently referred to as one of the most popular personalities on social media. Mike's work has been featured in Forbes, Wired Magazine, Newsday, and on his parents' fridge. Other credits and collaborators include The Public Theater, The Vineyard, The American Theatre Wing’s Tony Awards, and The Santa Fe Opera. 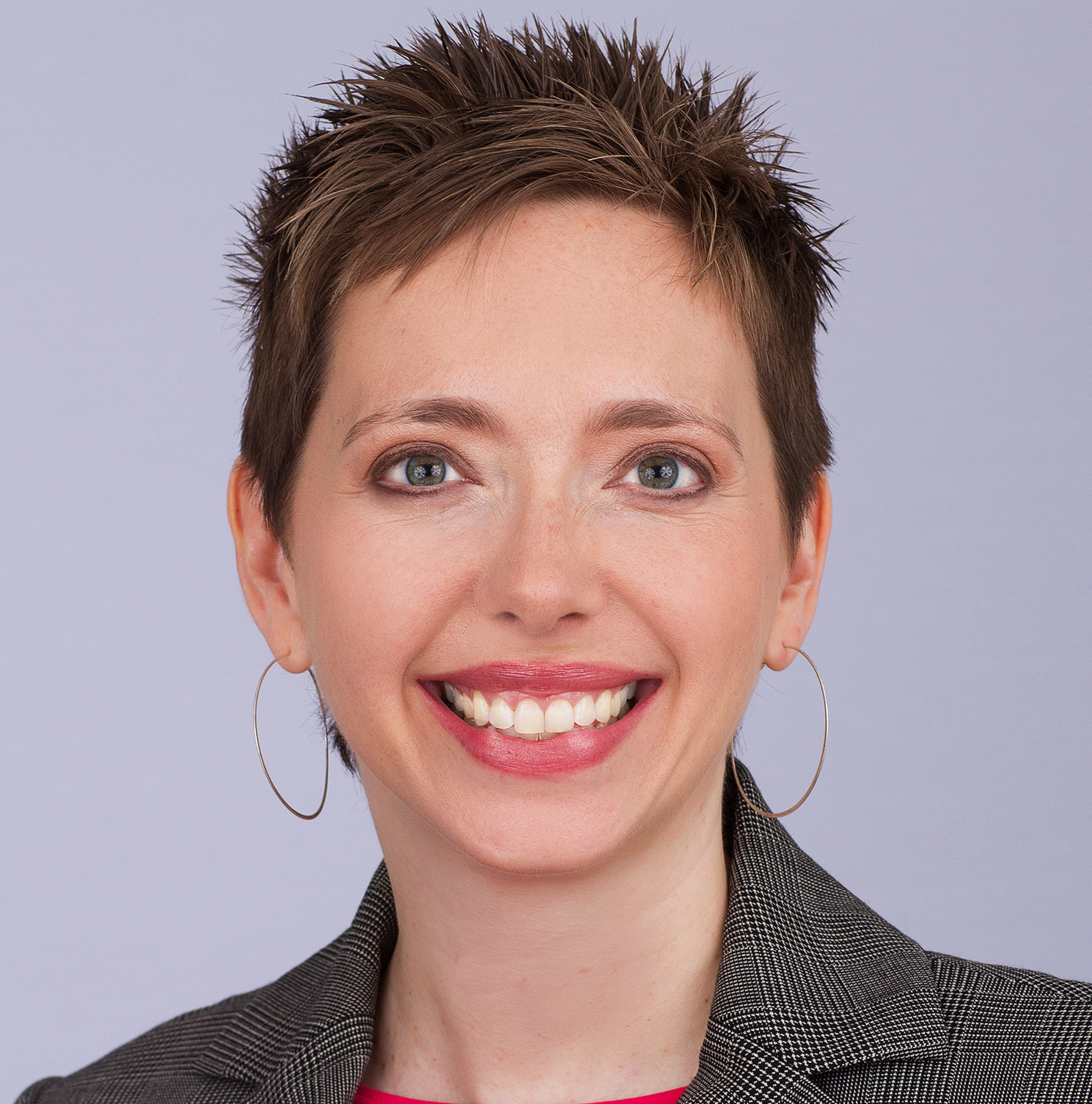 She is making an impact on the world in a truly unique way. As a keynote speaker and business advisor, Susan masterfully blends 25+ years of multisector leadership with her experiences being legally blind. She works with executive leaders of global firms and Fortune 500 companies, top not-for-profits, leading universities and the United Nations. Her work increases relevance, revenue and reputation for her clients and impacts the lives of people in 130+ countries.

Susan’s speaking style is high energy, interactive, inspirational and thought-provoking. Her adept ability to convey difficult and complex issues with approachability allows her to resonate with diverse audiences around the world. Exemplified by her TED Talk with 1.5M+ views, “How I fail at being disabled,” Susan humorously weaves a meaningful narrative and flips generally-accepted ideas upside down to uncover, challenge and redefine possibility. Susan focuses her audiences on salient issues and ambitious outcomes, building bridges to dedicated action and instilling confidence for their success.

In her role as business advisor, Susan partners with senior and executive leaders on enterprise-wide issues. Her team-oriented approach draws the best out of others, ensuring success for all. Her previous projects include leadership workshops for top talent; competitive differentiators and growth potential assessments; and strategy, horizon and transformation planning. Susan’s results have included 4x-7x revenue increases, accessibility policies and procedures development, enhanced process efficiencies, new program launches and executive leadership transitions.

Susan is an Executive Board Member of the Penn State Alumni Association's Alumni Council and a Board Member of both the New York State Preferred Source Program for People Who Are Blind and InTandem Cycling. She received her Master of Public Administration, specializing in Health Policy and Management, from New York University, Robert F. Wagner Graduate School of Public Service; and her Bachelor of Science, Health Policy and Administration, with minors in Business and Economics, from The Pennsylvania State University. 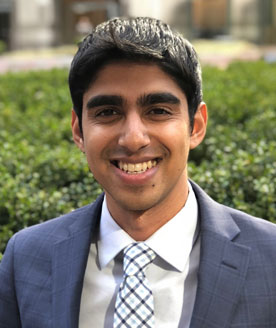 Anand Ganjam '15 is the Vice President of the Penn State Alumni Association. Ganjam joined the Alumni Council as a Student Representative in 2014, and was appointed for 3-year terms in 2015 and 2018. He was appointed to the Executive Board in 2016 and served as the Chair of the Young Alumni & Student Experience Committee from 2016-2018, and Chair of the Membership Experience Committee from 2018-2021.

Ganjam earned his Bachelor of Science degree in Finance from the Smeal College of Business in 2015. A four year student at the University Park campus, Ganjam held a variety of leadership roles during his time as a student. In 2014, Ganjam was elected by his peers to serve as the President of the University Park Undergraduate Association (UPUA), and over the course of his senior year he represented the voice of 40,000+ undergraduate students and worked to improve the Penn State student experience. He was also involved with the Penn State Finance Society, the Sapphire Leadership Program, and the Student Financial Education Center.

Professionally, Ganjam is a Strategy & Consulting Senior Manager with Accenture based in Philadelphia. He joined the firm immediately following graduation and over the past 6 years has supported several Fortune 500 organizations in the Life Sciences and Consumer Goods sectors with large scale change transformations. Ganjam is a member of Accenture's Talent & Organization / Human Potential practice and is deeply involved in creating meaningful employee experiences, increasing workforce digital fluency, and helping organizations adapt to change.

In addition to his work with the Alumni Council, Ganjam is a mentor through the Alumni Association's FastStart Program and through the Smeal College of Businesses, and previously served on the Student Affairs & Undergraduate Education Development Board. 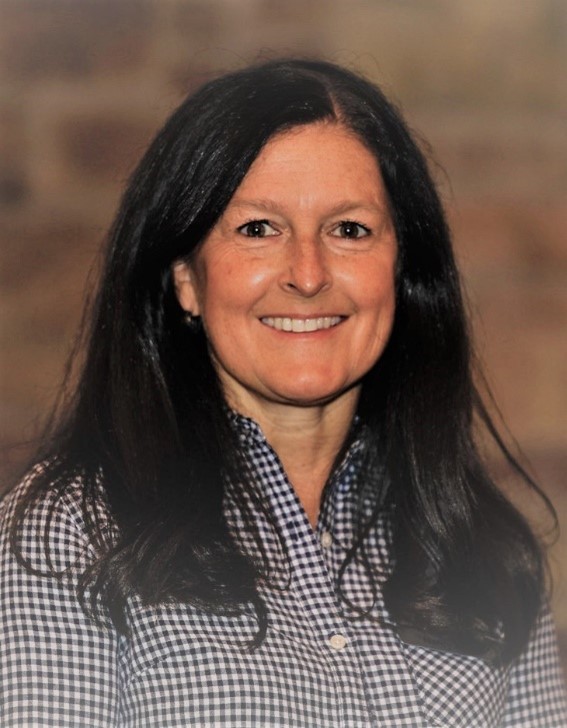 Nancy earned her Bachelor of Science in Hotel, Restaurant, and Institutional Management from Penn State in 1988. Nancy’s three sisters followed her to University Park, also choosing their father’s alma mater. Nancy and her husband Fred ’88 have three adult children, all Penn Staters (Zachary ’14, Nicholas ’16 and Natalie ’21). Numerous in-laws, nieces and nephews round out her Penn State family! In her spare time Nancy serves on the Finance Council at St. Peter Cathedral, spends time at Presque Isle/Lake Erie, and loves to plan a good theme party!

Paul J. Clifford '20g is the chief executive officer of the Penn State Alumni Association and 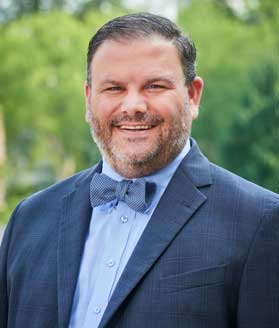 associate vice president for alumni relations for Penn State. He is the organization’s 11th chief executive in its 150-year history and began his tenure in January 2016.

A Pennsylvania native, Clifford joined Penn State after serving as the University of Oregon’s associate vice president of advancement and executive director of the University of Oregon Alumni Association. While at Oregon, Clifford directed all programs, events, communications and services for the University’s 190,000 alumni and led a team of 40 professionals across four locations. He was responsible for increasing membership by more than 8 percent; implementing an alumni scholars program; and leading the University’s Philanthropic Relationships and Engagement Team, an innovative model that cross-functionally integrates traditional alumni relations, annual giving, and other engagement strategies.

Clifford has spent his entire career in the alumni relations field and has broad national experience. A 12-time CASE (Council for Advancement and Support of Education) Award winner, Clifford has served on or chaired myriad CASE committees and is a five-time faculty member for the organization’s Summer Institute for Alumni Relations.

Clifford earned his bachelor of arts degree in History from Bloomsburg University of Pennsylvania in 1996 and a Master of Education degree in Higher Education from Penn State in 2020. Prior to his service at the University of Oregon, he was associate vice chancellor for alumni relations at East Carolina University and the president and CEO of the East Carolina Alumni Association—positions he held from 2004–2014. Previously, he was director of alumni outreach at the University of Connecticut Alumni Association, director of alumni affairs at SUNY New Paltz, and assistant director for alumni communications and student programs at James Madison University.

A native of Conyngham, Pa., Clifford and his wife Jennefer have three children.

Kelley M Lynch ’87 is the President of the Alumni Association. Lynch was appointed to the Council’s 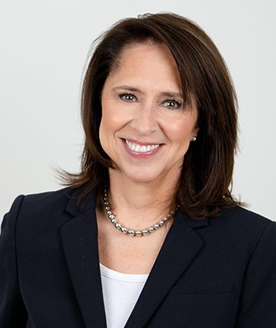 Executive Board in 2017 to serve as the Treasurer and Chair of the Budget and Finance Committee.  Prior, she served on the Alumni Engagement committee.  Lynch was elected to the Alumni Council in 2016.

Lynch earned a Bachelor of Science degree in Finance from the Penn State Business School, now the Smeal College of Business in 1987, and her MBA from Carnegie Mellon’s Tepper School of Business in 1994.

Professionally, Lynch has spent most of her career leading finance, customer satisfaction and human resources teams in helping to grow international companies based in and around Pittsburgh, PA. The industries she has worked in have varied from currently in Artificial Intelligence/Machine Learning, to pharmaceutical services, medical equipment manufacturing, and engineering and construction companies. Currently she is the Chief Financial Officer and VP of Operations for Othot Inc.  She enjoys working with cross functional teams to help scale and prepare companies for significant growth.

Lynch attended University Park for her undergraduate degree, but she understands the importance of Penn State’s Land Grant Mission and has gotten significantly involved with the Penn State Greater Allegheny Campus. Lynch is on the campus’s Advisory Board and she is also co-chairing the ‘Greater Penn State for 21st Century Excellence’ campaign for the campus.

In addition to her volunteer work with Penn State, Lynch has also been involved in numerous community and church organizations in Pittsburgh including The Center for Victims, Leadership Pittsburgh, The Tepper School of Business and the finance council of her parish. She also spends as much time as she can with her seven nieces and nephews, going to their various school, sporting and arts events, and working to make them all Penn State fans!